Stop Being A Control Freak

Being a control freak isn’t always a bad thing.

After all, it usually means that you’re competent, efficient, ambitious, and that you have high standards.

You’re probably a go-getter who makes things happens and likes to get things done right the first time.

But there are different types of control.

If you control yourself and your environment to keep yourself healthy and productive, that’s great.

But if you’re becoming the type who seeks control over others, or obsessively tries to control situations you couldn’t possibly influence, then you’re on a dangerous and self-destructive path.

Extreme attempts to get the upper hand over others or the environment manifest as obsessions and compulsions. It can make you paranoid in your relationships. It can make you feel like you need to perform some ordinary act over and over again, like triple checking that you locked the door before you can go to sleep.

And when you focus entirely on controlling things outside of yourself, your life becomes an uphill battle against impossible odds. Instead of feeling effective and competent, you can end up feeling constantly frustrated, angry and depressed – while the original fear and insecurity that caused you to become controlling continue to eat away at your emotional health.

And the people around you won’t put up with it for long either. Controlling people tend to alienate and anger those around them, chasing everybody out of their lives.

The way to get over this unhealthy need for control is to get back in touch with your own emotional state, which you can control. Because the more control you take over your internal state, the less compelled you’ll feel to seek external control.

This subliminal hypnosis session will allow you to release the fear and insecurity that underlie your need for control, allowing you to surrender to life and allow things to happen on their own.

You will be willing to fully embrace life, instead of embracing your fears and desires about it. And no, surrender does not mean that you must become totally passive. Quite the opposite! Without wasting energy on controlling things you can’t change, you’ll be far more productive in the areas of your life that you can and should control.

Surrendering means having faith that the world can handle itself, without your constant hyper-vigilance, so that you can focus on keeping yourself in order. Even now, within your own body, cells are dividing, you’re digesting food, your heart is beating, and your blood is transporting oxygen and nutrients. You are not doing any of these things. They are all being done automatically by forces that remain outside of your control.

Just imagine the freedom you’ll feel when you fully develop faith in the idea that most other things in life will continue to work just as effortlessly, without your constant worry and micro-managing. 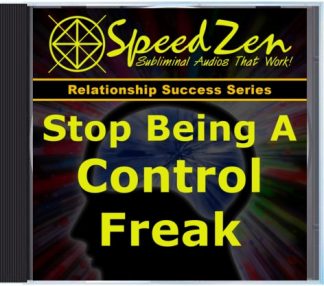