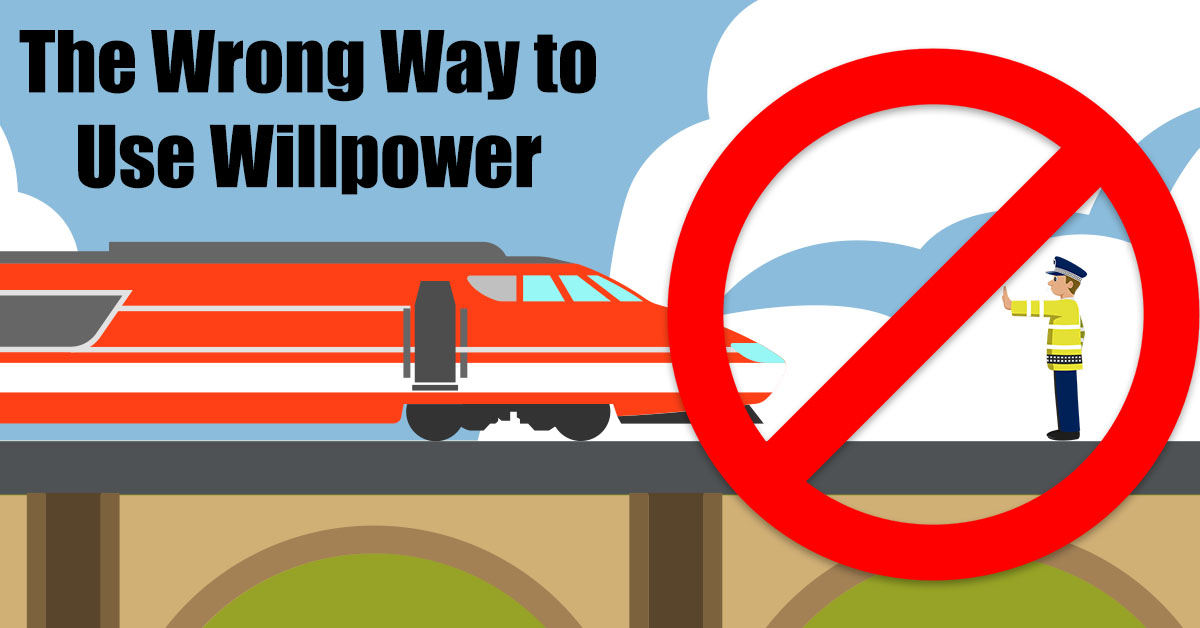 We’ve all been taught that we can improve our lives and achieve anything we want, if we could only get enough of that mysterious force called willpower.

Have a bad habit that’s destroying your life? Stop it with willpower.

As if it were that easy!

“If something isn’t going right in your life, you just need to tough it out, work harder, push forward and you will succeed,” we’re told.

But bad habits have the momentum of a runaway train.

And common “wisdom” tells us that the way to stop that train is to stand in front of it.

So you make resolutions to change, you give it all you’ve got until you burn out, and then you simply slide right back into the old pattern of behavior.

Not only does the bad habit continue, you may actually end up feeling worse than when you started.

So if willpower doesn’t work, why does it seem that some people can change while you can’t?

Why can some people set a goal and then work to accomplish it, while making it look easy?

Do they just have more willpower than you? Are they running on a different kind of mental and emotional level that allows them to make changes to themselves that seem impossible to everybody else?

They’ve just figured out that standing in front of trains is a bad idea.

And why would you want to stop it anyway? The momentum behind habits – good or bad – is very useful when it’s pointed in the right direction.

If you could just switch that train onto the right track…

It would take you exactly where you want to go, without any further effort on your part!

People who succeed at changing bad habits, achieving seemingly impossible goals, and accomplishing more than everyone else don’t have more willpower.

They just know how to…

Use That Little Bit of Willpower Where it Counts!

Instead of trying to stop that train with force of will alone, they use their willpower as leverage to redirect all that momentum into a good habit.

They find the lever to switch tracks and they pull it.

It takes way less willpower to redirect a habit than to stop it.

And you only have to do it once, because the momentum of the habit will keep on chugging along towards your new destination all on its own.

What this means in practical terms is that you can easily replace any bad habit with a good one when you know why you have the bad habit.

Years ago I was able to quit drinking because I discovered that, deep down, I was convinced that I needed to drink to feel confident.

So I looked around for another habit that would make me feel confident, without all the negative side effects, and came across weight lifting.

When I drank I would feel good about myself until the next morning, when I had to deal with the hangover. When I started lifting weights I immediately felt good about myself all the time. Packing on 30 pounds of muscle has a much better emotional payoff than the temporary, chemical-induced euphoria of alcohol.

And so, after years of struggling to stop drinking through force of will, I finally quit overnight by finding an activity that provided better results and switching to that.

I’ve helped several young people end their video game addictions by simply pointing out that they can get a better emotional payoff by working on becoming an entrepreneur.

If you spend your 20s locked away in your parents’ basement playing video games for 18 hours a day, you’re going to be a loser in your 30s.

If you spend your 20s locked away in your parents’ basement building an online business for 18 hours a day, you’re going to be a millionaire in your 30s.

Both activities require you to obsessively engage in repetitive tasks for hours on end. But one provides you with imaginary money, treasure and experience points while the other gives you real life business experience and lets you keep score with the balance in your bank account.

Get some real-life social interaction instead! Invite your friends and family over for dinner more often. Don’t have friends and family where you live? Find a group of people on MeetUp.com with common interests and start hanging out with them.

Humans are social animals and we thrive in social settings. The internet is a great way to share ideas, but we still need face-to-face interaction on a daily basis.

Read a book instead! All the time spent passively devouring entertainment could be put to use actively engaging your imagination, expanding your mind, or developing a useful skill.

And if you hate to read? Then at least binge watch something useful. There is a “how to” YouTube channel for every skill, hobby and craft you can imagine.

I could go on and on but hopefully you get the idea here.

The driving force behind a bad habit is the same emotional momentum that drives good habits. You NEED that momentum to get motivated to do anything. So why not apply that motivation to something that will actually improve your life instead of destroying it?

And yes, this always works when you find the right pivot point for switching from a bad habit to a good one.

So let me know in the comments if there’s a habit you want to change but aren’t quite sure how to do it.

Jason LynchJason Lynch is a hypnotist and life coach dedicated to helping people create the health, wealth and happiness they deserve.
Posted in:
Personal Development
Tagged:
addiction, bad habits, willpower
Previous article
Can subliminals change your eye color?
Next article
Be Careful How You Talk to Yourself!